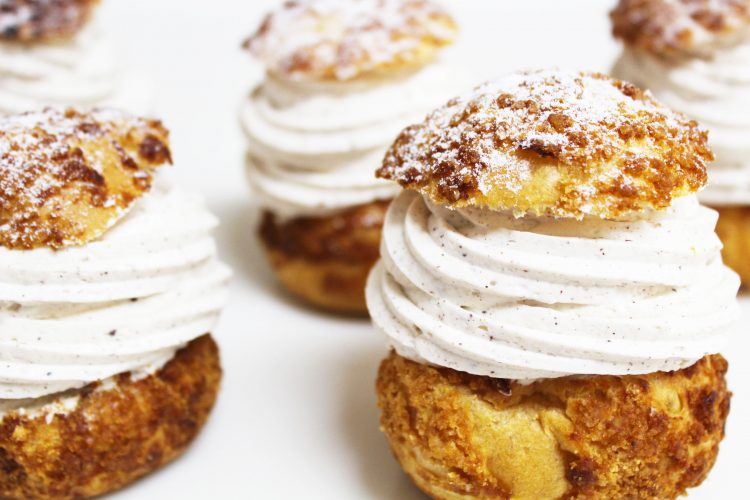 Hi everyone! It’s been a while since I’ve posted a recipe of Puffs! So today I’ll share with you the recipe of these delicious Cinnamon and Speculoos Puffs ? They are filled with Cinnamon Whipped Ganache with a Speculoos Insert in the middle and a disk of Cinnamon Biscuit!

We’ll start with the speculoos Insert:

2. Heat the cream with the speculoos paste until the paste melts.

3. Pour little by little over the egg yolks.

4. Cook everything over medium heat, while stirring, until it reaches 84°C.

5. Off the heat, add the hydrated gelatin and the mascarpone cream.

For the Cinnamon Ganache:

3. Pour over the cut chocolate and add the gelatin. Mix with a hand blender.

4. Add the rest of the cold cream.

5. Wrap with cling film (it should touch the surface) and refrigerate overnight.

For the Cinnamon Biscuit:

2. Whisk the eggs with the sugar and the cinnamon until they whiten and double in size.

3. Add the oil and milk and whisk for a few seconds.

4. Add the sifted flour, the baking powder and the salt.

5. Melt the butter to 50°C and add to the preparation.

7. Let it cool down before cutting disks of 4cm in diameter and 1,5-2cm in height.

1. Cream the softened butter with the sugar. Add the flour and the salt.

2. Spread between 2 parchment papers to a 3mm thickness. Cut circles of 5cm.

For the Choux paste:

2. In a saucepan, put the butter cut into pieces, the sugar, the water and the salt.

3. Heat until the butter melts. Then bring to boil.

4. Add the flour at once and off the heat. Mix until homogenic.

7. Add the eggs little by little and mix energetically between each addition. The paste must be shiny and should flow slowly.

8. Place in a pastry bag fitted with a 16mm plain tip.

9. Pipe circles of 5cm. Leave enough space between them.

1. Whip the Ganache at medium speed until firm peaks.

2. Place in a pastry bag fitted with an open-star tip.

3. Cut the top of the puff. Fill the bottom with cream.

4. Add a disk of cinnamon biscuit. Cover with cream.

5. Unmold the speculoos insert and place one half over the cream.

6. Pipe the Cinnamon Ganache all around the insert.

7. Sprinkle the hat with icing sugar and close the puff.

Your tasty Puffs are ready! Let the insert thaw in the fridge for 2-3h before tasting!

Please feel free to ask all your questions in the comment section and don’t forget to send me pictures of your realisation on my email address: partage@justonemorecake.com or send me a DM on my Instagram account: blog_justonemorecake , I will post them at the end of the post 🙂

2 thoughts on “Cinnamon and Speculoos Puffs”