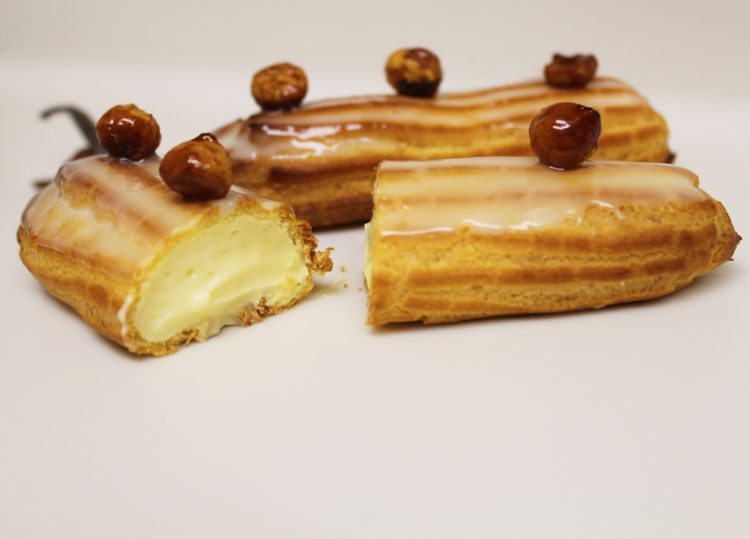 Hi everyone! After the chocolate eclairs, it’s time for the vanilla eclairs! These eclairs are made of a crunchy choux pastry filled with a smooth and light vanilla custard cream and topped with a white chocolate glaze. This recipe comes from Philippe Conticini, a French pastry Chef and is super easy and delicious!

Let’s begin with the glaze because it has to rest one night in the fridge:

2. Bring to boil the water and the sugar.

3. Add the cream and let it boil again.

4. Pour the mixture in two times over the white chocolate broken into small pieces and mix vigorously.

5. Add the gelatin and place in a dish. Cover with cling flim (the film must touch the surface) and refrigerate one night.

Now, for the custard cream:

1. Like the glaze, hydrate the gelatin in 6 times its weight in water, so in 72g.

2. In a bowl, whisk the egg yolks and the honey a few seconds.

3. Add the corn starch and the flour.

5. Bring to simmering point the infused milk and pour two third of it in three time over the egg mixture while whisking.

6. Pour everything back in the saucepan and cook over medium heat until it boils while whisking. After reaching boiling point cook for one more minute to remove the taste of the flour.

7. Off the heat, add the gelatin and the cold butter.

8. Place the cream in a dish and cover with cling film (the film must touch the surface). Refrigerate minimum 4 hours but it’s better to make it the day before.

For the choux pastry:

1. In a saucepan, put the water, the butter cut into pieces, the sugar and the salt. Bring to boil over medium heat. The butter should have melted before it boils.

2. Remove from the heat and add the sifted flour in one time. Stir until it is incorporated.

3. Put it back on low heat and stir for a few minutes to eliminate the moisture of the dough. It’s ready when the dough is smooth and forms a ball that doesn’t separate into chunks.

4. Put the dough in another container and let it cool for a few minutes. Add the eggs, previously beaten, little by little. You can use a spatula or the flat beater of a stand mixer. To know if you’ve added enough eggs, take a bit of paste with your spatula and it should form a smooth and shiny collar. You can also trace a line in the dough with the back of your spatula, if it closes slowly, it’s perfect. If it doesn’t close you must add a bit more eggs.

5. With a large fluted noozle, pipe 12cm long sticks with enough space between each one. If you don’t have fluted nozzle, scratch the top of the eclairs with a fork, this will help the eclairs to rise better.

6. Cook 15-20 minutes in a 180°C preheated oven (fan-assissted) until it has a nice golden color. If you have time you can diminish the temperature to 140° and let them in for 15 more minutes, this will make them stay crunchy even after filling them.

It’s time to assemble everything!

1. Take the custard cream out of the fridge and whisk it 1-2 minutes at maximum speed to incorporate as much air as possible.

2. Create three holes at the bottom of the eclairs.

3. Fill each hole with cream, using a small nozzle or a filling tip. When you see that the cream comes out from the hole, it means that there is enough cream.

4. Take the glaze out of the fridge and heat it in a bain-marie until it reaches the temperature of 37°, you can also use a microwave. Place it in a wide dish.

5 . Dip the top of the eclair in the glaze and let the surplus trickle.

Your eclairs are ready! Refrigerate until tasting! 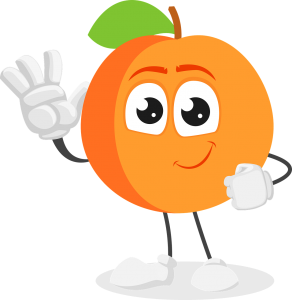